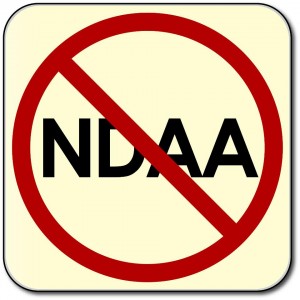 The 2012 NDAA, Sections 1021 and 1022, authorizes the indefinite military detention, without charge or trial, of any person, including an American citizen, and applies the “Law of War,” to U.S. soil, making the United States legally a battlefield.
Birthed on Social media, from Twitter to Facebook, and a YouTube video, People Against the NDAA (PANDA) was founded on January 29th, 2012 in Bowling Green, OH. Supported by groups across the political spectrum, including Young Americans for Liberty, Occupy Bowling Green,  the Northwest Ohio Conservative Coalition, and the Ohio Oathkeepers, our group of 7-10 college students went on the offensive. After flyering our university and getting involved in local politics, we launched PANDA nationwide in late April, 2012.
Since our founding, we have rapidly expanded into the largest organization in the country battling the NDAA, indefinite detention without charge or trial, and the application of the laws of war to U.S. soil and American citizens. We have pushed Anti-NDAA legislation in over 20 states and countless local jursdictions, including Oakland County, MI, Las Vegas, Nevada, and Sunbury, Pennsylvania, and have helped pass several pieces of legislation across the country. We have been covered by WND, the Activist Post, Interoccupy, Western Journalism and by countless radio shows, alternative media personalities, and articles. We have networked with over 100 liberty-oriented organizations and several alternative news sources.
Join us in the battle for the liberty and freedom of our country, spread the word on this dangerous law, and follow us to get all  the latest news on the fight for liberty, and restoring our country to Constitutional Governance.

Read more at http://pandaunite.org/aboutus/#SieQGg4APIfqcrku.99
Constitutional Authority Statement
From the Congressional Record Online through the Government Publishing Office [www.gpo.gov]
By Mr. THORNBERRY:
H.R. 1735.
Congress has the power to enact this legislation pursuant
to the following:
The constitutional authority on which this bill rests is
the power of Congress ``to provide for the common Defense'',
``to raise and support Armies'', ``to provide and maintain a
Navy'' and ``to make Rules for the Government and Regulation
of the land and naval Forces'' as enumerated in Article I,
section 8 of the United States Constitution.
[Page H2153]


About Constitutional Authority Statements On January 5, 2011, the House of Representatives adopted an amendment to House Rule XII. Rule XII, clause 7(c) requires that, to be accepted for introduction by the House Clerk, all bills (H.R.) and joint resolutions (H.J.Res.) must provide a document stating "as specifically as practicable the power or powers granted to Congress in the Constitution to enact the bill or joint resolution."
View My Stats