Be advised that the "Platform" was updated in September of 2016.  Our "MAIN" Issue stays the same: Repeal Cannabis from the U.N. Treaties, and the DEA.  REPEAL CANNABIS PROHIBITION and give freedom of this plant back to it's rightful owner's, "The People"... 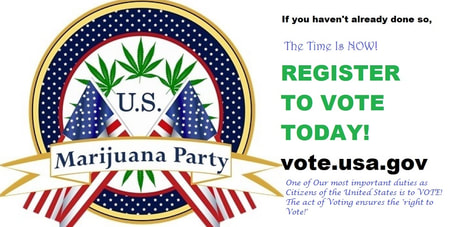 In an effort to make the “Platform” more readable, it is being re-written for public viewing.  The original will remain online as well for comparison.  Comments on this Platform are always welcome.  They can be posted in the comments section of the website or sent to ShereeKrider@USMjParty.com.
Our "MAIN" Issue stays the same:

Repeal Cannabis from the U.N. Treaties, and the DEA.  REPEAL CANNABIS PROHIBITION and give freedom of this plant back to its rightful owners, "The People"...

The USMjParty seeks to remove all penalties for adults 21 and over who choose to consume cannabis in a responsible manner.

We demand an end to the war on productive and otherwise law abiding citizens by the powers that be who claim to protect us.

We demand the right to use any medication our healthcare providers and we deem fit without government interference.

We demand the release of all people imprisoned on marijuana charges and that their criminal records be expunged.

We demand that all property seized in marijuana raids be returned to the rightful owners at once.

We demand that our law enforcement officers make more efficient use of our tax dollars and use the resources they have at their disposal to go after violent criminals and crimes that actually have victims.

We demand the right to grow marijuana for personal consumption, just as alcohol can be brewed at home legally so long as it is not sold, untaxed.

We demand that you stop treating us like second class citizens for consuming something that is less dangerous than alcohol and tobacco, both of which are legal and cause numerous deaths each year. Cannabis has never caused one.

(The following was added 9.21.15)
We demand an end to the use of ‘drug testing kits’ solely for the use of identifying what chemicals or plants that one personally
consumes or puts into or on their own body to be used for discriminatory reasons by employer’s or prospective employer’s, physician’s and government officials, The use of such testing is an invasion of privacy which is protected against by the Fourth Amendment.

Additionally, we are taking on other issues as well which are outlined below.

Freedom  of the plants Cannabis/Marijuana and INDUSTRIAL HEMP for use by all people via a REPEAL of Federal Statutes, (beginning with the removal of Cannabis from the  Controlled Substances Act  (CSA) as well as U.N. Treaties.  – To be non- taxable when not in a sale’s or marketing environment.  (If you grow it in your garden, and use it in your home, and DO NOT SELL it to others, then it remains non-taxable).

Any natural growing herb or flowering plant or other plant which produces euphoric and/or narcotic type of illusion/delusion such as  Salvia, Papaver somniferum, and  Psilocybin’s  and Kratom. This is not an all-inclusive list.

These plants are grown naturally should be removed from the CSA as well. These plants are found in nature, and are God’s gifts to us, to be used by those who wish to do so and should not have ANY repercussion for their use within the Federal or State Government Statutes. This includes growing and personal use.

Effective immediately no Urine Testing for the purpose of disqualifying a potential employee, Student nor a Patient from any type of care including Mental health and Pain care shall be administered.

It cannot be mandated by any Physician, or other Medical practice, nor by the Court system. (A Toxicology Screen  may only be done without permission if it is a matter of life and death and the Patient is unable to give their permission, in a Hospital setting, in the course of treatment, and MAY NOT follow the patient out of the Hospital after treatment)

IF A TOXICOLOGY report is needed in the course of law enforcement in order to prove (or disprove) a criminal act(s) then a Warrant must be issued from a Court in order to lawfully pursue a Blood, Urine or DNA testing.

The  Second Amendment  provides for the Citizens of the United States to be able to possess firearms. This is fact and shall remain fact. EVERYONE has the right to protect his life, family and liberty.

MINING
Coal Mining, Coal Ash, Mountain Top Removal Mining, Oil Drilling, Natural Gas Drilling and Fracking to be regulated and enforced via an independent panel of Citizens who do not hold a claim to any corporate entity involved in any type of Coal or Fossil Fuels.

An Abortion is a medical decision between a Woman and her Physician.
This is to remain confidential information between the patient and Physician, and the regulation should be limited to and comprised of the normal requirements for any Physician or Medical Clinic to operate.

FEDERAL FUNDING for Abortion services will have to be completely reviewed and rules and regulations regarding funding will be addressed according to the findings.

Gambling Casinos, Lotteries, Horse Racing, etc., should be regulated at the State level.

A SINGLE PAYER SYSTEM, FEDERALLY MAINTAINED, with 100% of covered health care costs – * up to but NOT including human organ transplant for a Patient over 21 years of age.

In addition to Medical Care by any Physician or Medical Facility, coverage will also include:

Dental and Vision Care as well as Prescription coverage and any ‘medical necessity’ such as durable equipment, as ordered by a Physician for his/her Patient, with proof of need submitted.

This is the basis for all those who wish to be included in a single payer system.  This Coverage would be administrated by a Single-Payer System and be paid for from Tax Revenue already in force and already paid by all U.S. Citizens.

The Administration, Finances, Membership and processing of Claims will be handled by a Federal Healthcare Insurance Entity working under Federal guidelines. It will not be a Private Insurer.

A Citizen may, as well, elect to remain with a Private Insurer and ‘self-pay’. However, this cost will not be tax deductible.


Additionally, the common practice of payments to Physicians (by Pharmaceutical Companies), for prescribing a Pharmaceutical’s medication must cease immediately for ALL types of medications.

NO LONGER will a Physician be allowed to receive any type of payment for writing a Prescription.

Drug abuse and pain clinics. As people have, since the beginning of time, had occasion to become addicted to those substances which have been either prescribed for pain and other ailments, as well as those drugs found outside the Physician’s office which are considered illicit, it must be provided for those persons to immediately receive addiction healthcare at the request of the Patient, at no cost to the Patient through the Medical Care Single Payer System. Additionally, new treatments for addiction should be studied and implemented, such as Ibogaine.

The Patient must take responsibility for his/her incorrectly using their medication or using illicit drugs, and be willing to ask for and accept treatment for their illness.

No healthcare for addiction shall be forced upon a Citizen for any reason. Addiction therapy cannot be mandated by Federal Law. As well, Physicians should not have DEA looking over their shoulders and dictating what a medical professional licensed for the care of these individuals can prescribe for their patients. The only way to guide people in the right directions is to not subject them to something that they do not need – While at the same time the Patient should not be denied legitimate pain care as needed.

Immediately, there should be access to clean needle exchanges as well as safe use environment, including counseling shall be made available for those on IV Drugs who choose to take advantage of the program. These programs should be covered under the Federal Health System - Single Payer System as well.

Inpatient and outpatient drug abuse as well as mental health clinics shall be free of charge and open to everyone in the United States, with their request for help.

Addiction and Mental Health care cannot be mandated by any Government entity. It must be requested by the Patient.

Whereas the United States has had insufficient monitoring of its pollution of all kinds and as a result thereof caused undue illness and imposed upon its citizens’ unfair damage to their right to enjoyment of life because of said pollution,

We propose that those persons living in high risk areas be offered/given the resources necessary to move out of those areas which are a threat to their health and welfare due to pollution of the air and/or ground coming from area industries and utilities.

GLOBAL WARMING must be addressed.
GREEN and SOLAR ENERGY must be adapted into our lifestyles.

All Imprisonment shall be taken out of the hands of any other Entity other than the Federal, State or County government. There shall be no more privately run prison’s in the United States.

All personal needs for Prisoners shall be furnished either free of charge if a necessity or at cost if not a necessity.

Complaints of brutality or abuse of the incarcerated shall be handled immediately.

Prisoners’ rights shall be addressed.

Those persons who are approached by law enforcement either on public property or private shall be treated fairly, humanely and constitutionally.   Abuse of power by police officers will be immediately handled in a manner which is fair to both parties involved and resolves the issue. Any officer accused of brutality will be immediately removed from his position without pay until the issue has been resolved. IF the officer is found not guilty, then at that time his pay shall be resumed and back wages paid.